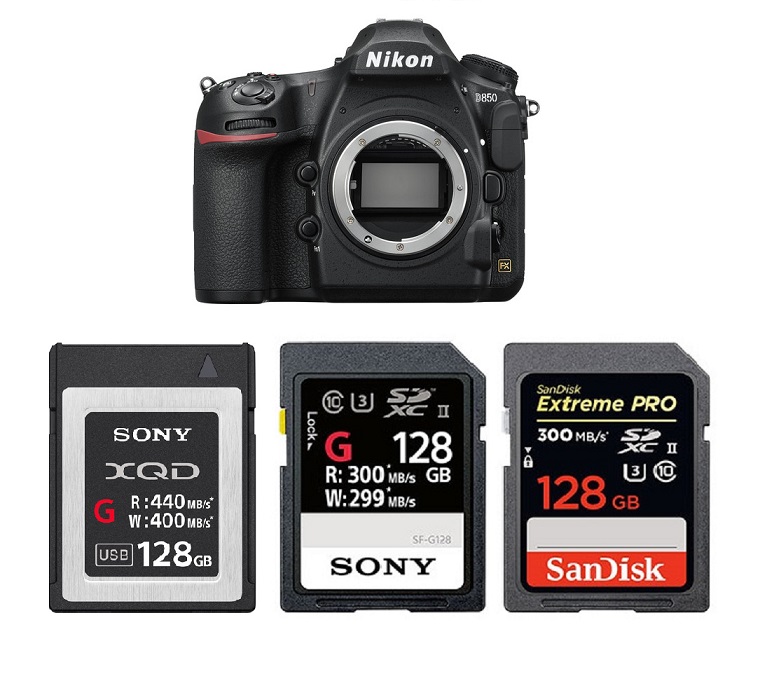 The Nikon D850 ($3,296.95 at Amazon, B&H, Adorama) is an amazing camera and it comes with two memory card slots: one XQD card slot and one SD card slot (supports UHS-II SD cards). The Nikon D850 has lots of excellent features like 45.7MP FX-Format Sensor, 4K UHD Video, 7fps burst and 8K time-lapse. In order to take full advantage of the Nikon D850 features, a fast memory card is a must: Fast write speed provides fast buffer clearing time between burst shots optimizing your shooting experience. Fast read speed can let large files such as 4K video or a bunch of high-resolution images by continuous shooting transfer to PC in seconds.

Reminder: if you plan to shoot videos, stick to 64GB (or larger) cards for the best video codex.

The XQD cards are much faster than SD cards. You will need a XQD card if you like shooting videos with Nikon D850. In addition to recording 4K content, the 440 MB/s read and 400 MB/s write speeds from Sony XQD G Series cards make it easy to capture photos in both burst mode and in RAW format, as well as streamline workflows. Currently, the Sony XQD G Series cards will be best and the only choice for you since the affordable Lexar 2933x XQD 2.0 memory card is discontinued.

The Sony SF-G UHS-II Cards are currently the world’s fastest SD memory cards boasting an ultra-fast maximum read speeds of up to 300 MB/s and maximum write speeds of up to 299 MB/s. In addition, the SanDisk Extreme PRO UHS-II SDXC and Lexar Professional 2000x are also excellent choices and two of the best selling sd cards with fast Read Speed & Write Speed, excellent choices!