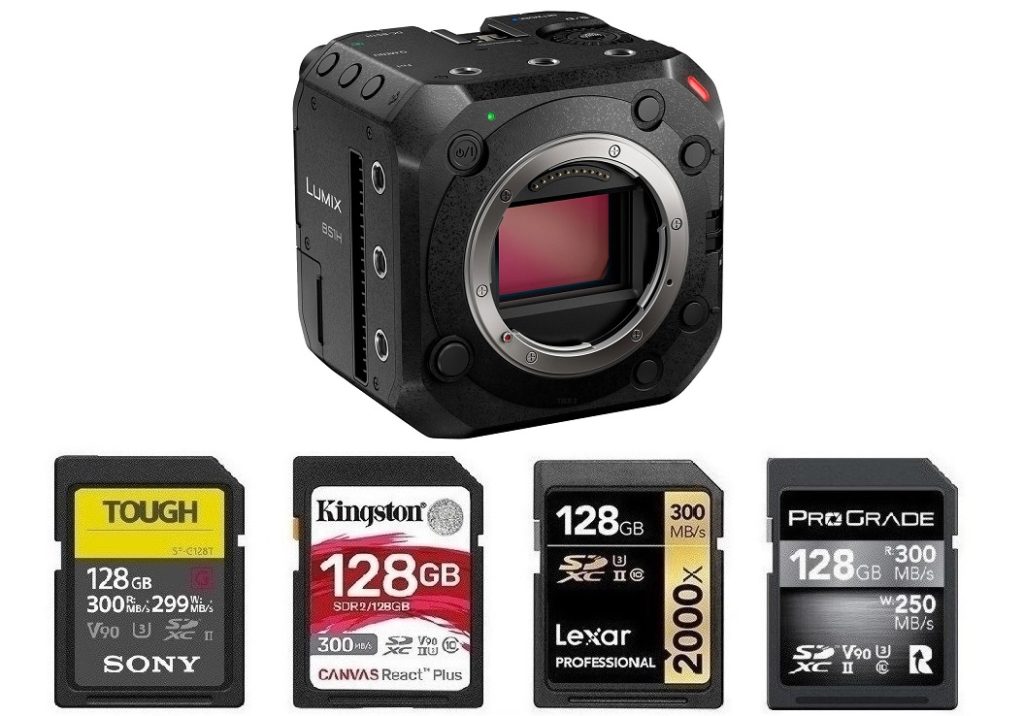 The Panasonic Lumix BS1H has dual SD card slots that both support the ultra-fast UHS-II SD cards. As its name suggests, the Panasonic LUMIX BS1H (B&H, Adorama) is a versatile box-style camera that combines the cinema-quality video performance of the LUMIX S1H with an easy-to-deploy box-style profile. The LUMIX BS1H accommodates a 24-megapixel full-frame sensor with Dual Native ISO technology and includes features such as 6K full-area high resolution recording, impressive bokeh, excellent low-light performance, wide dynamic range of 14+ stops, V-Log and more. The high connectivity and mobility of the BS1H enable users to flexibly use the camera to create their ideal camera system according to the scenario. In addition, consistency among their images minimizes post-production processing when used alongside other Panasonic LUMIX production cameras such as the BGH1 or the S1H.

Below is the full list of our top recommended SD cards for Panasonic Lumix BS1H camera:

Our top pick is the Sony SF-G Tough UHS-II SD Card. Offering maximum read speeds of up to 300 MB/s and maximum write speeds of up to 299 MB/s, the Sony SF-G Tough Series UHS-II SD card is currently the world’s fastest SD card on the market, and it is well-suited for video capture, including 8K, 4K XAVC S, 60p AVCHD, 3D, HFR, and Full HD video, as well as super fast continuous shooting. In addition, thanks to its V90 speed class rating, minimum write speeds are guaranteed not to drop below 90 MB/s.

The Kingston Canvas React Plus UHS-II SD Card is another perfect choice and great value SD card for shooting 8K, 4K, and Full HD video, as well as high-resolution photos. Besides, the ProGrade Digital UHS-II SDXC Card (V90) is a very popular choice with a little cheaper price and almost the same speeds. In addition, Delkin Devices, Lexar, SanDisk and Hoodman also released their super fast UHS-II SD cards, which are great choices for Panasonic Lumix BS1H. For the Lumix BS1H users, we highly recommend picking up a couple of V90 UHS-II SD cards from the list.

Don’t own the Panasonic Lumix BS1H yet? Just get it at B&H, Adorama.