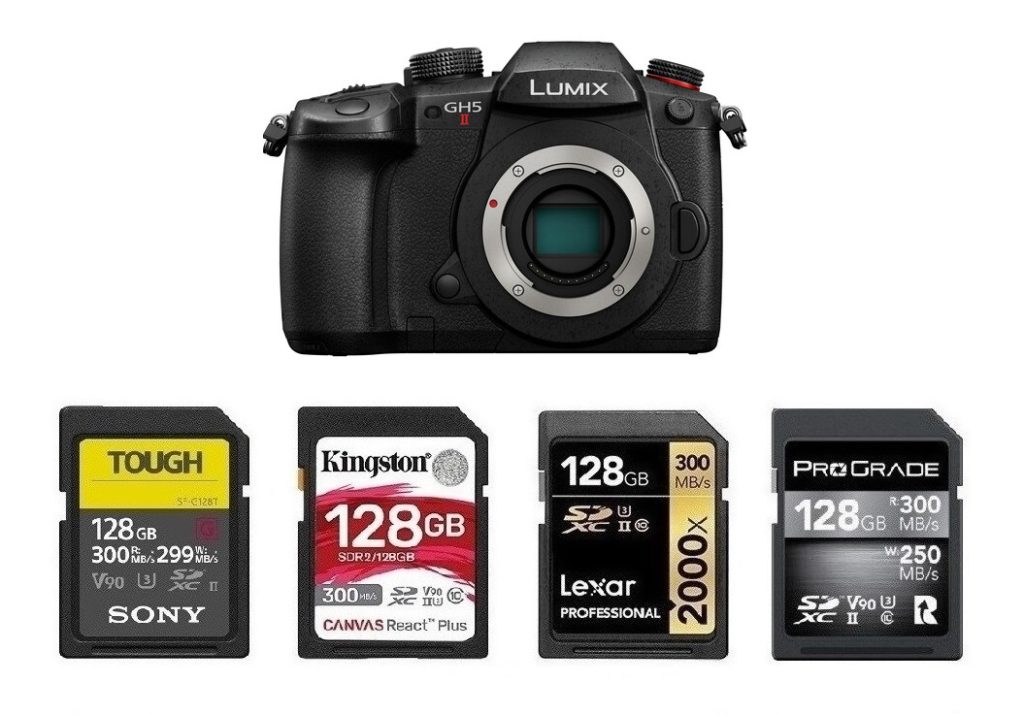 The Panasonic Lumix GH5 II has dual SD memory card slots that both support the ultra-fast UHS-II SD cards. Featuring a 20.3MP Live MOS Sensor with AR Coating, the Panasonic Lumix GH5 II (Amazon, B&H, Adorama) is capable of unlimited video recording in various settings and can record DCI and UHD 4K with the full sensor area and can output 10-bit 4:2:0 internally up to 60p, or 4:2:2 at 30p. And the Panasonic GH5 II is capable of wireless live streaming using the LUMIX Sync smartphone app supported by USB PD outdoors or indoors. V-LogL is pre-installed to deliver a high dynamic range and broad colors, which makes you easy to match the color tone with the footage recorded in V-Log and V-LogL of Panasonic and LUMIX line-up. Whether indoors or outdoors, only the camera and a smartphone are required to reach an audience, making the GH5 II an ideal camera for electronic news gathering, travel, event, lecture, and live commerce applications.

So, in order to get the ultra high read speeds (transfer speeds) and write speeds (fast buffer clearing time) to get the best out of your GH5 II camera, here we collect the fastest and reliable SD cards for Panasonic GH5 Mark II mirrorless camera, you can choose the one you like.

Our top pick is the Sony SF-G Tough UHS-II SD Card. Offering maximum read speeds of up to 300 MB/s and maximum write speeds of up to 299 MB/s, the Sony SF-G Tough Series UHS-II SD card is currently the world’s fastest SD card on the market, and it is well-suited for video capture, including 8K, 4K XAVC S, 60p AVCHD, 3D, HFR, and Full HD video, as well as super fast continuous shooting.

The Kingston Canvas React Plus UHS-II SD Card is another perfect choice and great value SD card for shooting 8K, 4K, and Full HD video, as well as high-resolution photos. Besides, the ProGrade Digital UHS-II SDXC Card (V90) is a very popular choice with a little cheaper price and almost the same speeds. In addition, Delkin Devices, Lexar, SanDisk and Hoodman also released their super fast UHS-II SD cards, which are great choices for Panasonic GH5 II mirrorless camera. For the GH5 II users, we highly recommend picking up a couple of V90 UHS-II SD cards below.

Don’t own the Panasonic Lumix GH5 II yet? Just get it at Amazon, B&H, Adorama.