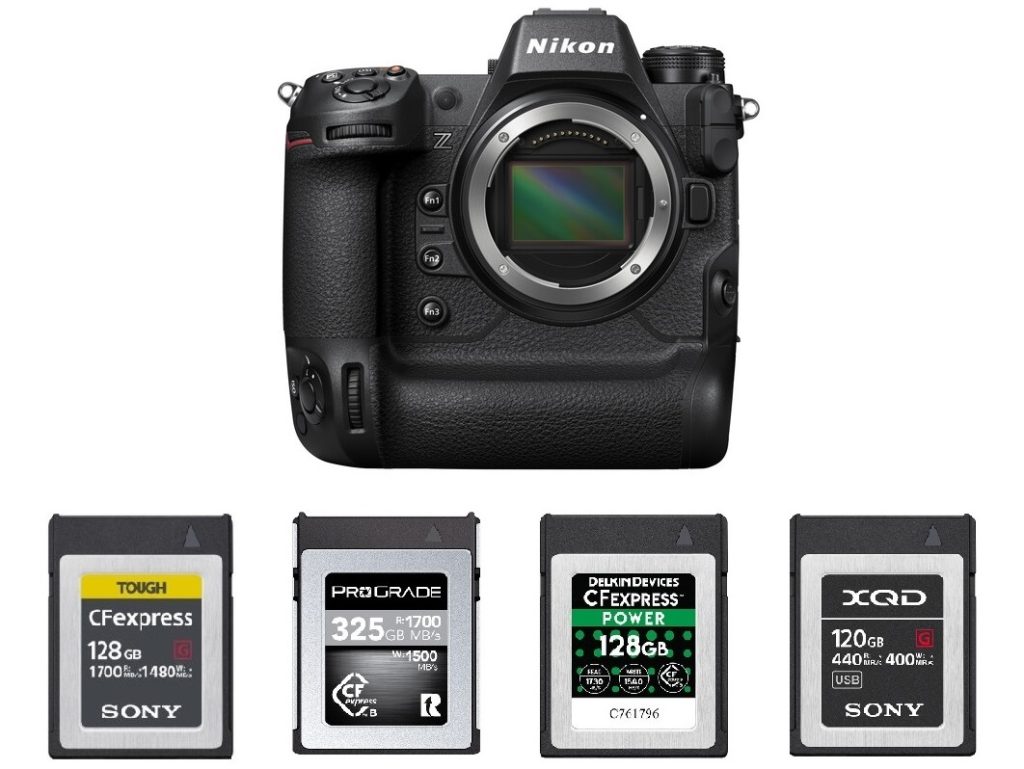 Below are our top recommended memory cards for the Nikon Z9, including CFexpress cards (Type B) and XQD cards. You can just choose the one you like!

Both Nikon Z9 card slots support the ultra-fast CFexpress Type B cards that are ideal for 8K & 4K video recording and high-speed, high-resolution burst shooting needs. The CFexpress card is currently the fastest and the most capable memory card format on the market, and it will be the standard of future memory cards for internal high resolution RAW video recording since its theoretical maximum speeds are ridiculously high. Currently, Delkin Devices Power & Black CFexpress Cards, ProGrade Digital Cobalt & Gold CFexpress Cards, Sony TOUGH CFexpress Cards and SanDisk Extreme PRO CFexpress are the top choices for you!

Built with strength, reliability, and performance, the Delkin Devices Power & Black CFexpress Cards provides read speeds of up to 1730 MB/s and write speeds of up to 1540 MB/s that are well-suited for raw and continuous-burst photography, as well as 8K, 6K, and 4K video at high bitrates and frame rates. Besides, the ProGrade Digital Cobalt & Gold CFexpress Cards and Sony TOUGH CFexpress Cards are also the top fastest CFexpress cards on the market – providing read speeds of up to 1700 MB/s, which helps to quickly offload content to your computer, and write speeds of up to 1500 MB/s. Additionally, the Cobalt’s minimum write speed is guaranteed not to drop below 1400 MB/s. Beyond its speed, the Sony TOUGH memory card also has a reinforced physical design to withstand falls from up to 15′ and has been rigidity tested to 70 N of force. Or, if you are a SanDisk fans, the SanDisk Extreme PRO CFexpress card is also a great choice. Below are the top recommended CFexpress Type B cards for Nikon Z9 mirrorless camera based on the speed and price, just get the one you like!

In addition to the CFexpress cards, both Nikon Z9 card slots are also compatible with the XQD cards. Currently, there are only three choices for you: Sony G Series XQD Card, Delkin Devices Premium XQD Card and Nikon XQD Card.

Available in 32GB, 64GB, 120GB and 240GB capacities, the Sony G Series XQD Card is one of the fastest XQD cards on the market and the most favorite among professional photographers and videographers. In addition, Delkin Devices Premium XQD Card offers the same speeds as the Sony G Series XQD – read speeds of up to 440 MB/s and write speeds of up to 400 MB/s, making it anothjer great choice for continuous raw burst shooting and 4K video recording. Nikon also released their XQD card, but only available in 64GB. So, if you would like to get a XQD card, we highly recommend picking up the Sony G Series XQD card or the Delkin Devices Premium XQD card.