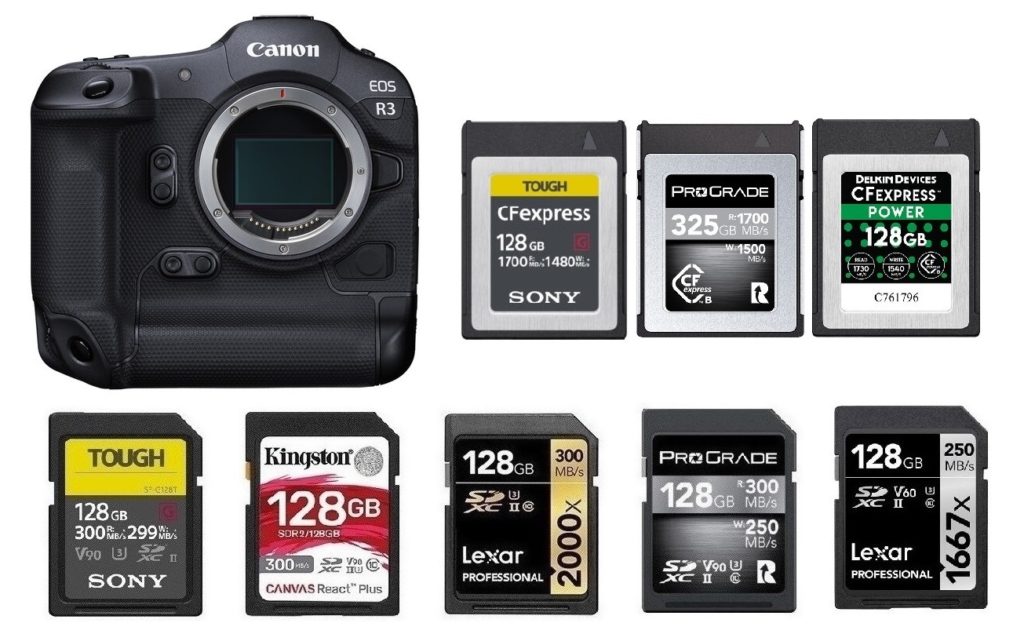 Here is the guide for you to get the top recommended memory cards for Canon EOS R3 mirrorless camera, including CFexpress cards (Type B) and UHS-II SD cards.

The Canon EOS R3 has dual memory card slots: 1 x CFexpress (Type B) card slot and 1 x UHS-II SD card slot. Revolving around a new 24MP full-frame back-illuminated stacked CMOS sensor and an updated DIGIC X image processor, the Canon EOS R3 supports up to 30 fps continuous shooting with an electronic shutter and up to 12 fps with the mechanical shutter, high-res 6K raw 12-bit internal video recording and uncropped 4K 120p 10-bit video recording with Canon Log 3. The improved Dual Pixel CMOS AF II with 1,053 AF Points features evolved EOS iTR tracking for subjects such as people, animals, as well as select cars and motorcycles down to EV -7.5. Featuring an ISO range of 100-102400 (expandable to 204800), the Canon EOS R3 delivers a large range of standard and expanded ISOs (for still images), and a flexible set of auto options to help enhance shooting in varied and fast-changing lighting situations. Landing between the robust EOS R5 and Canon’s flagship EOS-1D X Mark III, the Canon EOS R3 is designed to satisfy the most demanding expectations in a professional camera – emphasizing speed, performance, and reliability.

Below is our full list of top recommended memory cards for the Canon EOS R3, including CFexpress cards (Type B) and UHS-II SD cards. Hope it can help you get the best out of your Canon EOS R3 mirrorless camera.

The Canon EOS R3 card slot 1 supports the ultra-fast CFexpress Type B cards that are ideal for 6K & 4K video recording and high-speed, high-resolution burst shooting needs. The CFexpress card is currently the fastest and the most capable memory card format on the market, and it will be the standard of future memory cards for internal high resolution RAW video recording since its theoretical maximum speeds are ridiculously high. Currently, Delkin Devices Power & Black CFexpress Cards, ProGrade Digital Cobalt & Gold CFexpress Cards, Sony TOUGH CFexpress Cards and SanDisk Extreme PRO CFexpress are the top choices for you!

Designed for capturing raw 8K, 6K, and 4K video, the Delkin Devices Power & Black CFexpress Cards and ProGrade Digital Cobalt & Gold CFexpress Cards provide read speeds of up to 1730 MB/s and write speeds of up to 1540 MB/s, making them suitable for professional photographers and videographers. Besides, with read speeds up to 1700 MB/s and write speeds up to 1480 MB/s, the Sony TOUGH CFexpress Type B Card is one of fastest memory cards around, and it is ideal for recording a variety of video resolutions, bit-rates, and compressions, as well as uncompressed continuous RAW shooting of fast-moving action such as motorsports and wildlife. Beyond its speed, this TOUGH memory card also has a reinforced physical design to withstand falls from up to 15′ and has been rigidity tested to 70 N of force. Below are the top recommended CFexpress Type B cards for Canon EOS R3 mirrorless camera based on the speed and price, just get the one you like!

Our top pick is the Sony SF-G Tough UHS-II SD Card. Offering maximum read speeds of up to 300 MB/s and maximum write speeds of up to 299 MB/s, the Sony SF-G Tough Series UHS-II SD card is currently the world’s fastest SD card on the market, and it is well-suited for video capture, including 8K, 4K XAVC S, 60p AVCHD, 3D, HFR, and Full HD video, as well as super fast continuous shooting. In addition, thanks to its V90 speed class rating, minimum write speeds are guaranteed not to drop below 90 MB/s. So, if you are seeking the highest write speed with a V90 rating as well as extremely high 250-300MB/s read speeds for transferring photos from the card to a computer, this is the recommended card for you.

In addition, the Kingston Canvas React Plus UHS-II SD Card is another great choice and great value SD card for shooting 8K, 4K, and Full HD video, as well as high-resolution photos. Besides, the ProGrade Digital UHS-II SDXC Card (V90) and the Delkin Devices Power UHS-II SDXC Card (V90) are two of the most popular SD cards with an affordable price on the market! If you need some fast and reliable UHS-II SD cards without spending too much (like Sony SF-G Tough UHS-II SD Card), these two cards are the perfect choice for you. If you need some budget choice, you can also consider the Sony SF-M Tough UHS-II SD Card (V60) and the ProGrade Digital UHS-II SD Card (V60). Below are the top recommended UHS-II SD cards for Canon EOS R3 based on the speed and price, just get the one you like!

Don’t own the Canon EOS R3 yet? Just get it at Amazon, B&H, Adorama.