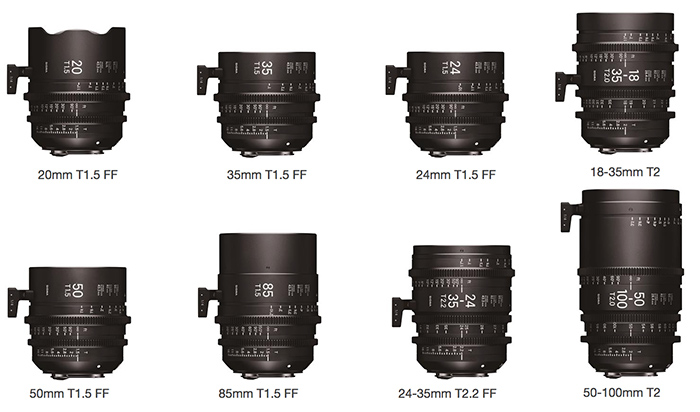 The new Sigma Cine Lenses are weatherproof and designed with an emphasis on optical performance and making the most of high-resolution sensors.

These 8 New Sigma Cinema Lenses will be available in Q4 2016 – initially only available in Japan and the United States. Additional information can be found on Sigma’s website.

Amsterdam, The Netherlands — September 7, 2016 – The SIGMA CORPORATION is pleased to announce that it will enter into the cinema lens market with the release of its SIGMA CINE LENSES, designed specifically for cinematography. In the world of digital film production, there is an increasing demand for higher resolution, and SIGMA’s new lineup of high-performance lenses is compatible with the latest, high-resolution digital cinema cameras. SIGMA has developed its own production system by establishing the required technology for mass production of high-performance lenses for ultra-mega-pixel shooting. The company feels this valuable new lens line could create a fundamental change in digital film production, and provide a new solution for cinematographers.

For the first phase, SIGMA will release two zoom lenses in Japan and the USA for EF and E mount camera systems. Furthermore, another zoom lens and five prime lenses will be released to the market in sequence from 2017 onward. SIGMA plans to develop additional zoom and prime lenses as well as add support for PL mount camera systems. The latest release information will be sequentially updated on its official website. 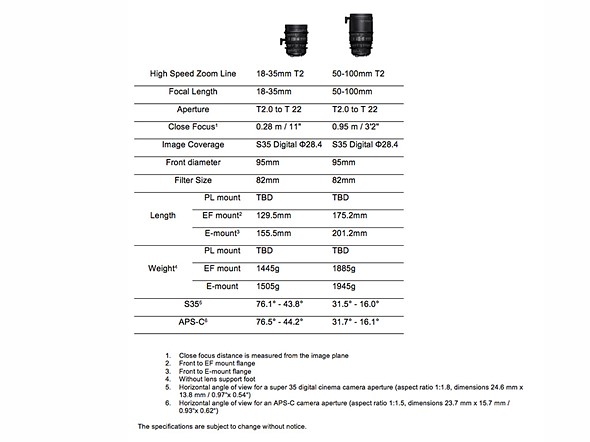 FF Zoom Line
FF Zoom Line is compatible with a full-frame image circle, and the optical performance is ready for high-resolution shooting such as 6K – 8K. It provides a rare option for cinematographers since very few lenses can cater to the requirements of the latest digital cinema cameras’ image sensor, which is larger than Super 35, and expand the range of compatible cameras. This is the cinema zoom lens offering the highest image quality and compact design. This lens is not available in PL mount. 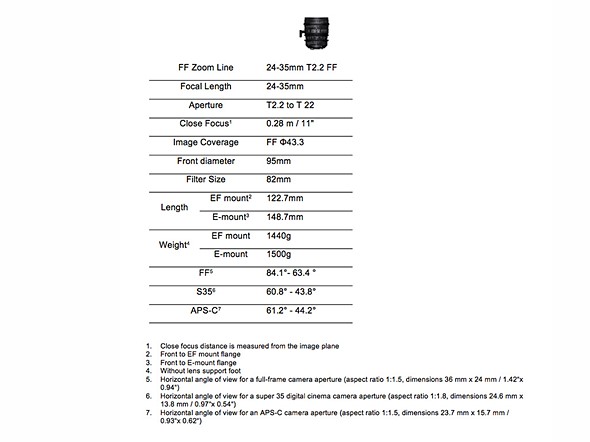 The lineup ranges from 20mm to 85mm, and all five lenses are T1.5. They are compatible with full-frame sensors and, while being more compact, can offer superior resolution than other high-end prime sets do. With the five prime lenses from FF High Speed Prime Line, there is no need to change the lighting to shoot a variety of cuts. These lenses bring a consistent level of light to the production and offer greater consistency with regards to the film’s look and color/contrast before it enters post-production. 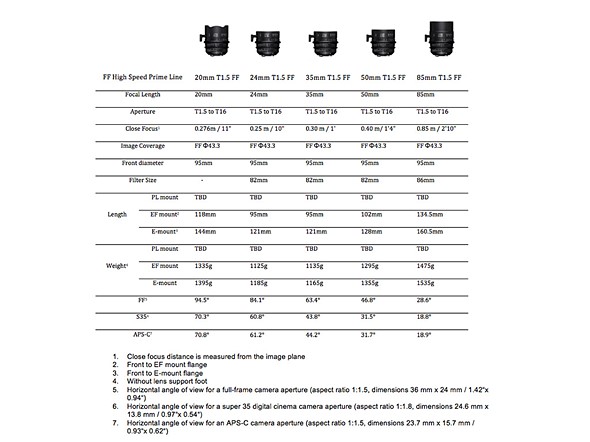 Each CINE lens model is weatherproof and has luminous paint markings to aid in changing and operating the lens in the dark. It touts a long focus rotation of 180 degrees and is guided by cams for smooth operation and accuracy. The CINE lens design features standardized essentials such as an 82mm front for ND filters* and a 95mm front diameter for matte box use and standard gear positions for accessories like follow focus. They also include a manual linear iris control and electronic mounts that provide vital camera metadata. Each lens is manufactured and inspected in the Sigma factory located in Aizu, Japan.

Availability: toward the end of 2016 (in Japan and USA in the first phase)
Pricing: TBD
Mounts: Initially Canon-EF and Sony-E to be followed later by PL**