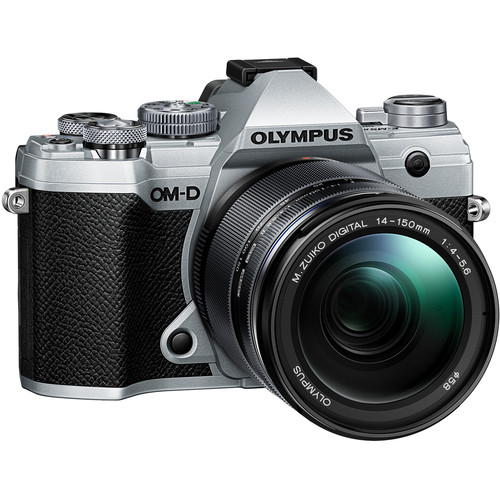 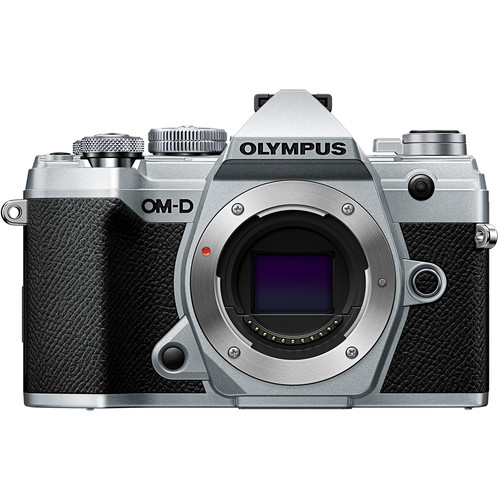 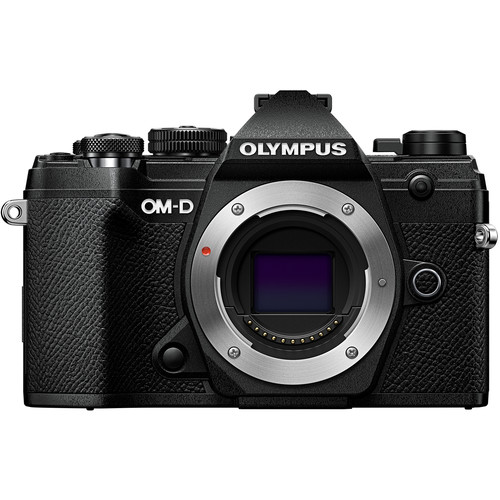 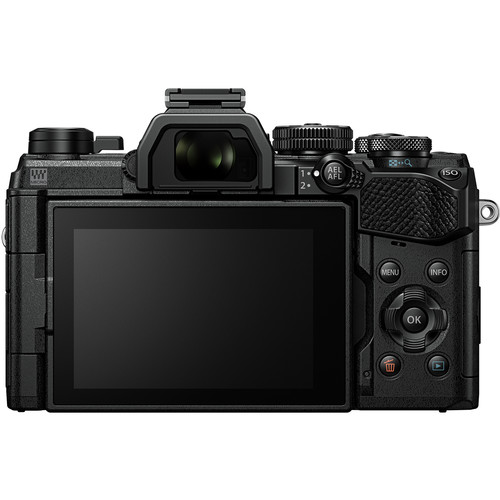 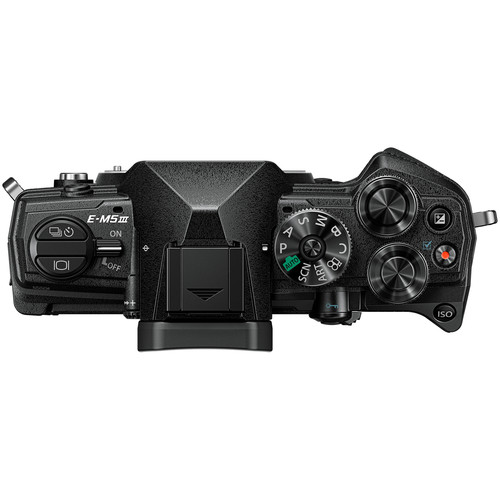 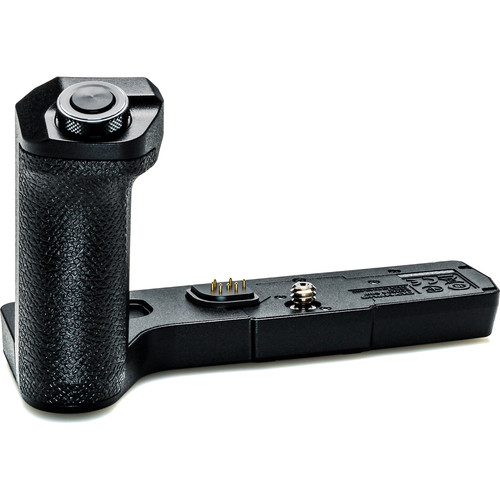 Compact, Lightweight, Weathersealed System
Many components of the E-M5 Mark III, including the image stabilization unit, have been miniaturized in an effort to deliver the smallest body possible. Dramatic improvements in power-saving performance make it possible to use the more compact BLS-50 battery to enhance the lightweight, compact design. The compact system size means that users can shoot for long periods of time in locations where tripods cannot be used ensuring no missed photo opportunities. Experience complete system mobility when pairing the E-M5 Mark III with the diverse lineup of high-resolution, lightweight, interchangeable M.Zuiko lenses.

The Olympus OM-D E-M5 Mark III is equipped with features found in high-end OM-D models, packed in a compact body that is approximately 55% the volume of competitive full-frame mirrorless systems . It features the highly acclaimed dustproof, splashproof and freezeproof weathersealed design that Olympus is known for, to allow continuous shooting even in the most severe environmental conditions. The E-M5 Mark III delivers a modern take on the striking, iconic design of the traditional OM system with advanced styling, including a moulded exterior, refined grip and a retooled mode dial. The body also features an updated Custom Mode setting, to recall frequent settings for easy access while shooting. The BLS-50 battery contributes to the compact, lightweight body while offering a power saving design, allowing the same number of shots as its predecessor. The BLS-50 battery captures approximately 310 shots per charge.

Outstanding Image Quality
The OM-D E-M5 Mark III boasts the same 20 Megapixel High-Speed Live MOS Sensor found in the OM-D E-M1 Mark II, offering superior performance, exceptional clarity and speed in all aspects of image capture. Maximizing that performance are the TruePic™ VIII image-processing engine and 5-Axis Image Stabilization unit. When paired with high-resolution M.Zuiko Digital lenses, it is capable of capturing images with minimal noise even at high-sensitivity settings, and delivers high image quality with minimal distortion up to the edges of the shot.

The E-M5 Mark III features Anti-flicker Shooting to help suppress the effect of flickering light sources while using both the mechanical and electronic shutter.

High Speed AF Performance
The OM-D E-M5 Mark III is equipped with 121-point all-cross type On-chip Phase Detection AF for precision focusing, even for fast-moving subjects where focus is difficult, or in low light situations, a staple feature in the E-M1 Mark II. Unlike DSLR cameras, there is no degradation in AF precision when using a fast lens. The E-M5 Mark III offers high precision, high-speed focusing from the maximum aperture setting with all M.Zuiko Digital lenses, regardless of subject patterns. The algorithm has been improved over previous models, preventing focus from unexpected jumping to the background, even in mixed perspective scenes with near and far subjects.

Select from six AF target options, including single, 5-point, 9-point, 25-point, 121-point and small. AF/AE tracking supports 10fps high-speed sequential shooting (silent sequential shooting L) and 30fps with focus and exposure locked after the first frame, for capturing subjects with intense movements. The moving subject tracking algorithm utilizes AF information from both Live View images and recorded images to enable quick tracking of unpredictable subject movement and changes in subject speed. Experience superb AF operability while using the touch pad to move the AF frame while tracking a moving subject. Use the Touch Shutter/Touch AF on the LCD screen to select your area of focus within the frame.

Compact Image Stabilization Unit
The 5-Axis Image Stabilization device, including the actuator, has been redesigned for the E-M5 Mark III in order to deliver a higher level of stabilization in a smaller package, resulting in a smaller and lighter body. Based on camera shake information obtained from the high-sensitivity gyro sensor and image analysis, the TruePic™ VIII image processor precisely controls the image stabilization unit to provide up to 5.5 shutter speed steps of compensation performance, reducing blur caused by camera shake. Increase that to 6.5 shutter speed stepswith 5-Axis Sync IS when the OM-D E-M5 Mark III is paired with M.Zuiko Digital lenses equipped with in-lens image stabilization .

Olympus Core Competencies
Olympus interchangeable lens camera systems’ biggest benefit is its amazing mobility, thanks to the compact, lightweight nature of the cameras and powerful image stabilization, combined with an entire lineup of high-resolution and high-performance M.Zuiko lenses–resulting in consistently sharp, high-quality photos and video.

Versatile Shooting Features
Long Exposure Shooting
Long exposure shooting is made easier with several amazing features pioneered by Olympus: Live Composite, Live Bulb and Live View. Live Composite creates a single image from multiple shots by compositing (stacking) them together. This mode combines long-exposure with compositing and is incredibly useful and easy-to-use. Applications for Live Composite vary from star trails, Milky Way, auroras, light painting, light trails, fireworks and so much more. Live Bulb allows the photographer to hold the shutter release to begin the exposure and watch the image build on the LCD screen. Simply release the shutter when you feel the image has reached the exposure of your liking. Live View sends a live image feed from the camera’s sensor to the LCD, allowing the user to compose shots from a variety of angles, with the ability to adjust composition, change exposure and white balance using the LCD screen.

Pro Capture
Pro Capture mode makes it possible to record scenes that are difficult to time at a full pixel count of 20M, such as a bird taking flight. From the moment the shutter button is pressed fully, 14 frames are retroactively recorded and retained, making capturing the perfect shot simple. Up to 30 fps high-speed shooting is available in Pro Capture H. RAW recording is also supported.

Focus Bracketing and Focus Stacking
Focus Bracketing can capture up to 999 shots with a single shutter activation while shifting the focal position slightly between each shot. The amount of focal shift can be selected from 10 levels, and recorded images can be combined into one single, evenly exposed image, using Olympus Workspace V1.1 image editing software. It is possible to create a single image with a depth of field that cannot be obtained simply by stopping down the aperture. Because the aperture is not stopped down too far during shooting, this feature also enables high image quality. The camera is also equipped with Focus Stacking, which automatically composites images on the camera. Eight photos with different focal positions are composited on the camera for a photo with a greater depth of field that is in focus from the foreground to the background.

Large, High-Visibility Viewfinder
This model features an approximate 2.36 million-dot, high-contrast OLED panel for vivid colors and an EVF (electronic viewfinder) optical system for minimal distortion to the edges of the screen. Such a design makes framing more accurate so the user can concentrate on shooting. The long eye point makes it easy to check overall framing, even when wearing glasses.

1/8000 Second High-Speed Mechanical Shutter
The E-M5 Mark III features a high-speed mechanical shutter that operates up to 1/8000 second, making it possible to shoot at a wide aperture setting for defocusing effects even when using a large-diameter lens in bright outdoor conditions.

SCN (Scene) Mode
In SCN mode, simply choose one of six themes and select the photo most like the scene you want to capture to activate optimal settings.

Art Filter
Equipped with 16 Art Filter options, you can capture creative photos using simple controls with the E-M5 Mark III. While checking the filter effect on the LCD monitor, you can create images that are uniquely your own.

Custom Mode
Register your frequently used camera settings to Custom (C on the mode dial) with the E-M5 Mark III. After being registered, simply set the mode dial to C to instantly activate and shoot using saved settings.

USB Charging
USB charging is available on the E-M5 Mark III for charging the battery on the move, when the camera is not in use.

Electronic Flash, FL-900R (Sold Separately)
This high-power flash with a maximum guide number of 58 synchronizes high-speed sequential shooting . It has an angle of illumination of 24-200mm and 14-20mm7 when used with the wide panel. It features dustproof, splashproof, and freezeproof performance and can be used with the separately sold FR-WR Wireless Receiver for wireless flash firing via radio signal. It can also be used to wirelessly fire the bundled flash FL-LM3.

Electronic Flash, FL-700WR (Sold Separately)
This compact, lightweight electronic flash has a maximum guide number of 42. It delivers stable wireless communication even in bright outdoor locations and when used around obstacles and functions as a commander/receiver. Because it features a dustproof, splashproof and freezeproof construction, it can be used in any type of shooting scene. It can also be used to wirelessly fire the bundled flash FL-LM3.

Macro Flash, STF-8 (Sold Separately)
This macro flash is perfect for using the two heads to produce images with a greater sense of three-dimensional space and has a guide number of 8.5 (2 heads) or 6 (1 head). It features a dustproof, splashproof, freezeproof construction for outdoor use and supports the unique Olympus Focus Stacking feature for photos with a greater level of creativity. Lenses compatible with the bundled ring adapter are M.Zuiko Digital ED 30mm F3.5 Macro, M.Zuiko Digital ED 60mm F2.8 Macro, and M.Zuiko Digital ED 12-40mm F2.8 PRO.

Large Eyecup, EP-16 (Sold Separately)
This accessory blocks external light making the viewfinder easier to use. By using materials with elastic properties, the eyecup fits all eyes, regardless of whether the user is wearing glasses or not. Support from both the eye area and both arms improve stability for a posture that reduces camera shake.

Compact Gun Microphone, ME31 (Sold Separately)
A directional gun microphone is useful when recording sounds outdoors such as birds singing. The adoption of machined metal body makes it very sturdy. It can be attached to the hot shoe of the E-M5 Mark III with a commercially available hot shoe mount.