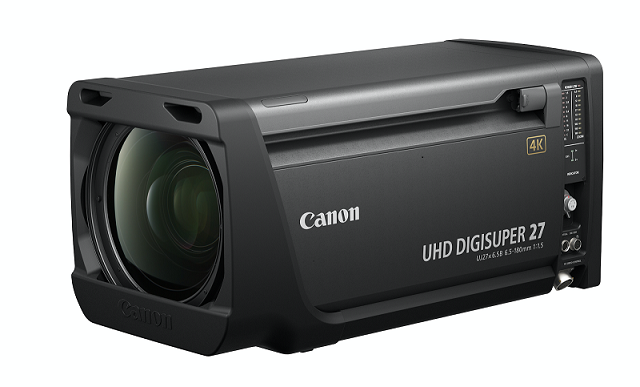 MELVILLE, N.Y., September 6, 2016 – Canon U.S.A., Inc., a leader in digital imaging solutions, today introduced the UHD-DIGISUPER 27, a high-optical-performance studio zoom lens for 4K UHD broadcast cameras employing 2/3-inch sensors. In addition to achieving a level of resolution surpassing that of 4K from the center to the peripheral areas of image field across the entire focal range, the UHD-DIGISUPER 27 features the same body size and approximate weight as its HDTV predecessor, the DIGISUPER 27. The lens has a 6.5–180mm focal length range that can be ideal for a wide variety of studio productions that include news programs and variety shows as well as major events, supporting the emerging proliferation of 4K UHD content. With the release of this new 4K UHD studio lens, Canon is expanding its 4K UHD broadcast lens lineup to meet the needs of a broadening range of industry users.

Deployment of new glass materials and new optical coatings coupled with advances in manufacturing precision have helped lower chromatic and monochromatic aberrations to less than half those of conventional HDTV lenses. The UHD-DIGISUPER 27’s excellent color reproduction has been tailored to support the recently standardized UHD wider color gamut which, in turn, supports the creation of incredibly immersive visual content. Additionally, the UHD-DIGISUPER 27 employs a built-in 2x extender that allows users to increase the zoom range two-fold, realizing a 360mm focal length at the telephoto end and, even at its increased maximum focal length, the lens enables superb imaging expression with outstanding resolution performance exceeding that of 4K.

The new Canon UHD-DIGISUPER 27 features a new easy-to-hold design for easy installation for enhanced usability. Furthermore, because traditional HDTV zoom lens controllers can be used to control the electric zoom and focusing operations, users can make the transition to 4K UHD content creation using systems they are already familiar with.

The Canon UHD-DIGISUPER 27 is expected to go on sale in March 2017.